Calan Films is a Cardiff based production company that make inspiring promotional films and videos for the for a range of clients as well as broadcast productions for the BBC, S4C, ITV and Channel 4. 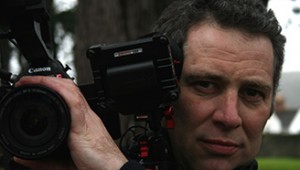 Before establishing Calan Films Colin worked for BBC Scotland, BBC Wales and BBC Science, Documentaries and Current Affairs in London as well as numerous independent companies across the UK.

In 2008 Colin interviewed convicted Polish murderer/ novelist Krystian Bala in a polish jail and told the remarkable story about the writer who wrote a novel about a real life murder, the murder he committed! Colin has also made many documentaries for Radio 4 namely ‘Meet the Descendants’ which looked at the story of immigration in the UK.

Colin is passionate about landscape, science, history, conservation, humanitarian issues, and telling great stories and finding creative concepts to get a message across in the most engaging way. He has recently made conservation films for Welsh Government, RSPB, Snowdonia National Park and the Wildlife Trust.

As a post-production engineer Terry has edited several Sony Gold winning programmes at “The Celtic Film and Media Festival” and other international awards.

He has worked extensively in Africa, the States, India, Australia and several countries across Europe both as a producer, and sound recordist.

Terry has also worked on a number of humanitarian projects. Indeed Terry’s last project took him to the Democratic Republic of the Congo to make a documentary about rape as a weapon of War. This hard hitting documentary won Terry the “Best Investigative radio documentary” at the Association of International Broadcasters; beating entries from 60 other countries. Judges described it as “a completely engaging, harrowing and thought-provoking piece of radio. An immensely brave piece of work that stays with you long after the end”.

Bruce Rawlings is an ex BBC Director/film editor of 23 years standing who now specialises in creating observational sequences that draw on the material from multi source shoots. Bruce’s skill is, as well as being a great stroryteller is being able to incorporate a wide range of disparate shots into a film that gets the message or mood that a producer requires across to the audience.